For September’s Secret Recipe Club, I was paired with Nicole of Hapa-tite. Nicole lives in the DC area and is strongly influenced by all the cultures in her family, which means some pretty delicious and varied foods! My favourite are all the cute Bento box things she has!

I spent a few days mid-September visiting with my sister in Quebec and since we planned on having a baking fest, it seemed like the perfect time to make something for secret recipe club! I was also really impressed with myself as I hardly procrastinated at all on these! (A first in the last few months!)

I ended up choosing her Zucchini Loaf and making it Bean Style – lower sugar, less fat and gluten free! We also just made half a recipe as we didn’t want to have that much food after all our baking expeditions. We definitely weren’t disappointed – I really wish that I made the whole recipe and took some home with me as these are perfect breakfast muffins as they aren’t too sweet and are packed with nutrition! When I make them again, I want to try using some almond flour to increase the protein and maybe even use a bit less starch as these muffins would still be awesome even if they were a little denser.

I have to admit that I liked being able to take photos not at my own house – especially for the different props! The house my sister lives in has an old picnic table in the back yard under an acorn tree, which helped make these photos super “fall-esque.” 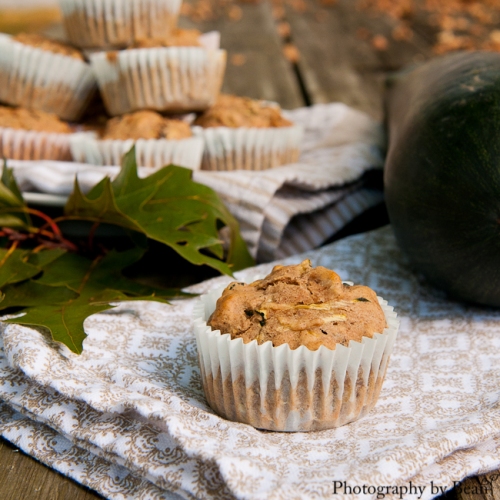 How are you making the most of fall? 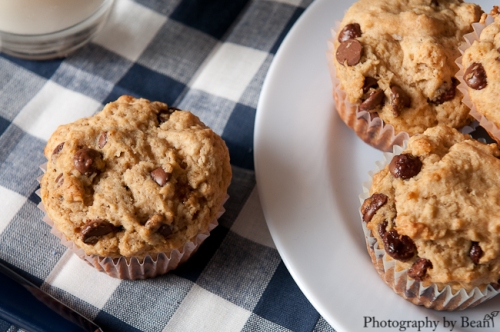 For November’s Secret Recipe Club, I was paired with Casey of Beautiful Disasters. She has lots of delicious recipes, mainly desserts (and nothing I would remotely consider to be disasters),  including this caramel corn, puppy chow (if I hadn’t already eaten all my gluten free chex, I totally would have made this!) and this apple pull-apart bread (if only I could figure out a way to make this gluten free and work out the same way – perhaps I sense a challenge?)

Here’s how I adjusted the ingredients to make them gluten free (and possibly dairy free):

Have you ever made chocolate chip muffins?

Have you ever woken up with the strange desire to bake something? I did one morning last week. I wanted to make something healthy and to use up some of the 50 billion plums (well, maybe not that many, but quite a few) we bought from a stand in Saskatchewan.

So, I’m actually making good on my promise to cut back the amount of sugar I eat, especially now that most of my big events are over for a while. I decided that I  procrastinated for too long – always putting it off for the next day so I could continue eating whatever I wanted – not the healthiest attitude. Normally I wouldn’t care, but the numbers on the scale have been on a slow increase lately, which is something no one likes. I guess the notion of eating too much food while not doing enough exercise and not gaining any weight is a delusion after all.  Drat, I was hoping that was true! 😛

Since I wasn’t wanting to eat sugar, I looked into different methods of sweetening baked goods without sugar. I do consider things like agave nectar and palm sugar as sugar as my body still reacts to then as sugar despite having a different GI index and I don’t own any stevia, so the search was on. I remember coming across a few recipes where dates were used to sweeten baked goods, so I thought, why not?

There really aren’t many recipes out there that use plums except for crisps and crumbles, so I improved this muffin recipe. I was inspired by this date sweetened muffin recipe by Nicole from A Dash of Compassion.

Since they don’t have any added sugar and use fairly fibrous and protein rich ingredients, this muffins are perfect for breakfast or a mid afternoon snack without the blood sugar spike. In addition, each muffin has the equivalent of half a plum in it, so that has to be good, right?

I sent some of these muffins along with Mr. Bean to his guy’s night (fortunately no turtle burgers this time around!) and they all disappeared. I’m taking that as a good sign as in my experience, five guys don’t eat eight or nine muffins if they don’t like them.

What is your favourite type of muffin?

I hope everyone had a Happy Thanksgiving, or at least a good Monday. My lab proposal is in, my latest quiz is done (Anyone remember non-homogenous ODEs – even though I think that I did that part wrong – whoops!) and I’m learning how to simulate petrochemical processes for our propylene plant, so life’s okay.

Anyways, Mr. Bean was out in Saskatchewan visiting his ailing grandpa over the weekend, so I thought that I would visit my parent’s church after watching this guy get baptized* on Sunday. It just so happened that they were having a potluck lunch to celebrate thanksgiving, so I thought that I would take the opportunity to pawn off a bit of baking – I’m really quite keen to give my baking to other people as 24 cupcakes/muffins/etc. isn’t very attractive on my waistline. I’m sure you’ll agree.

I wanted to try something a bit different from the usual cupcake but would be slightly classier than a muffin. I chose to make Pumpkin Streusel Muffins based on this recipe. Apparently, they didn’t disappoint because they disappeared pretty quickly. 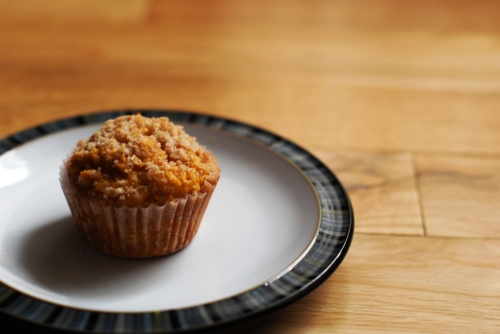 What is your favourite pumpkin delight?

*Holy man am I smitten by Malachi. I’ve been on somewhat of a baby obsess lately as there are so many cute babies everywhere! Rest assured that I am not pregnant, despite how much old ladies at church say how good babies look on me.

I was bored on Monday, so I made some muffins in about 1/2 hour. They are so tasty and light – almost like “normal” muffins!

Gluten, Dairy and Soy Free Muffins
Adapted from the Joy of Cooking 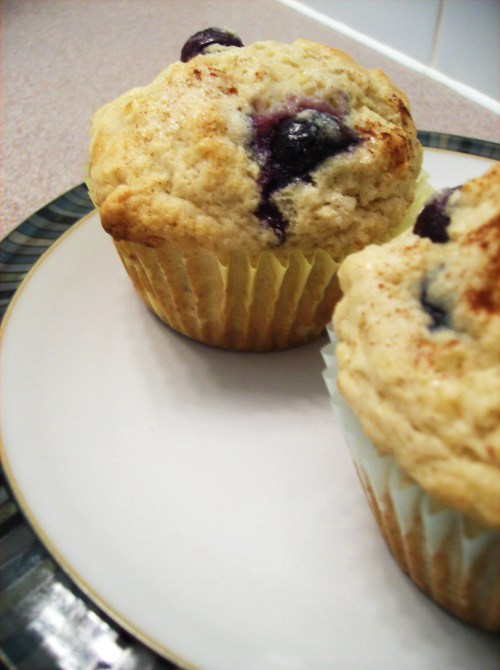 What is your favourite muffin recipe?