One of the (many) competitions in ENGG Week is Iron Chef. The rules are similar to the actual TV show: you have a secret ingredient (maple syrup), have to make an appetizer, main dish and dessert in 90 minutes and have to have a team of 3 students and 2 professors. I was at first a bit hesitant about helping out (cooking under pressure in front of many people and not in  my own kitchen? Can you say anxiety?), but then I realized that this challenge was right up my alley and got really into it.

What was on the menu, you ask? Well, we had to make something that could  be made with materials and equipment we brought in ourselves and it (obviously) had to use maple syrup. So here’s what we made:

I had an awesome and hilarious team. They were quite helpful in getting everything set up: 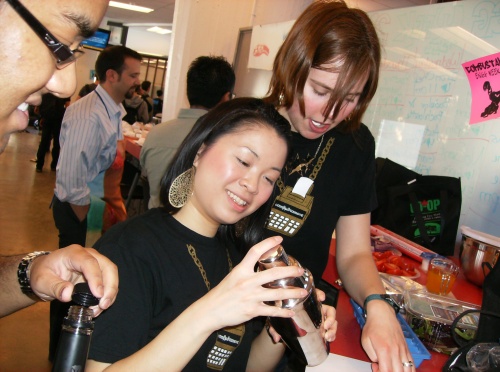 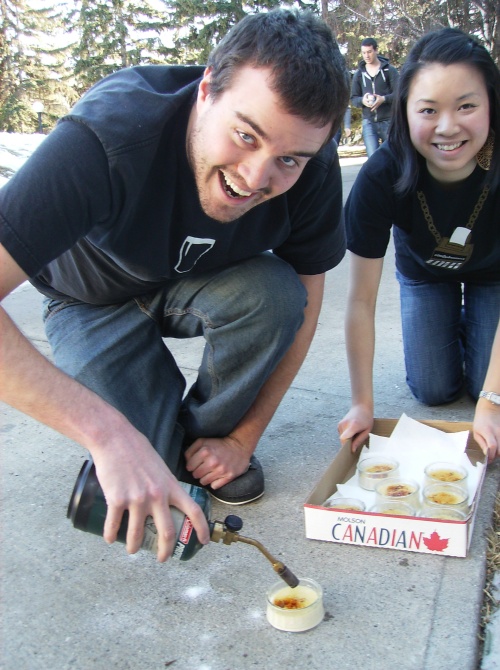 Or perhaps some crème brûlée?

Or some bacon wrapped apples? (Actual rumaki uses chicken liver, but this variation is so much better.) 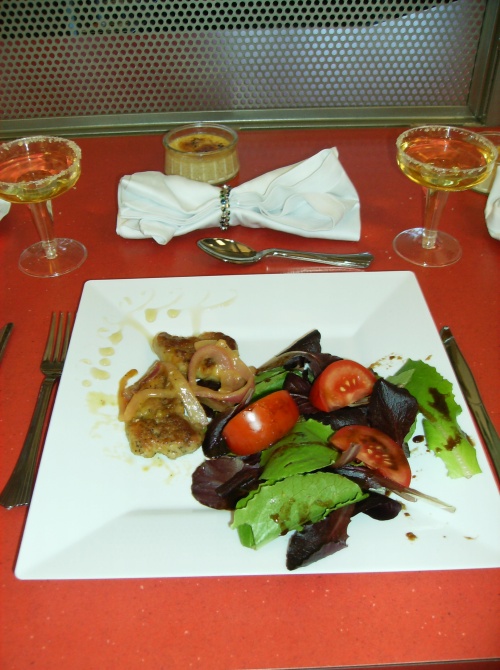 How about the whole set up?

We tried to channel an urban upscale restaurant – I think we did fairly well considering that we were set up in the engineering student’s lounge.

The judges seemed to enjoy what they were eating despite it being the 4th meal they had consumed for Iron Chef. I don’t know if we won the challenge, but I like to think that we did. 🙂

Even if we didn’t win, it was a lot of fun and our food was fantastic. Ever had random people clamour to eat partly eaten food that other people ate and then rave about how great it was? Yeah, that happened – I’m just really hoping that no one was sick.

It was an interesting experience – I learned that counter top convection ovens don’t know what even heat is yet they are still incredibly useful, that adding an extra egg yolk makes crème brûlée that much better, that using a freezer that can freeze ice in 3 hours is a good idea and that said freezer is a great way to fast track cooling the crème brûlée. 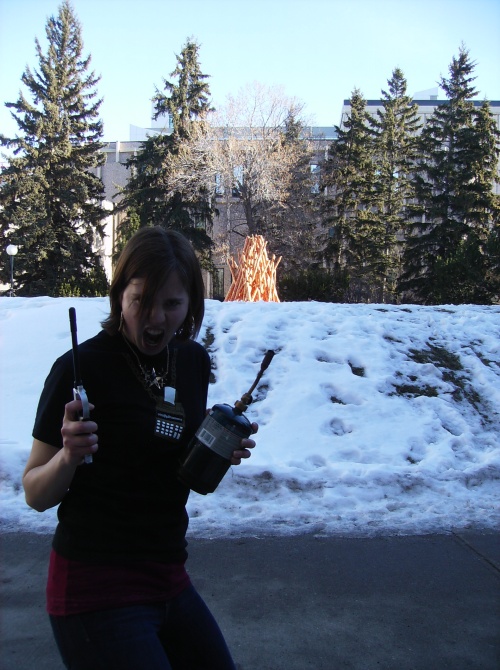 Oh, yeah. I also learned that I probably shouldn’t be given a blow torch.

For ENGG Week, each department must decorate a hallway as to show off their respective theme. I didn’t get any pictures of other department’s hallways (except Mech), but I think our combustamove dance party themed hallway was the best. Not that I’m biased or anything. 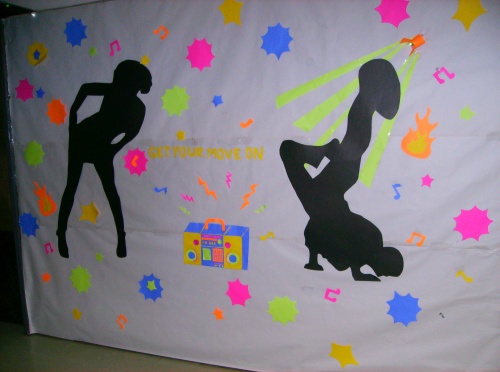 We even had stars for our favourite Chem related musicians: 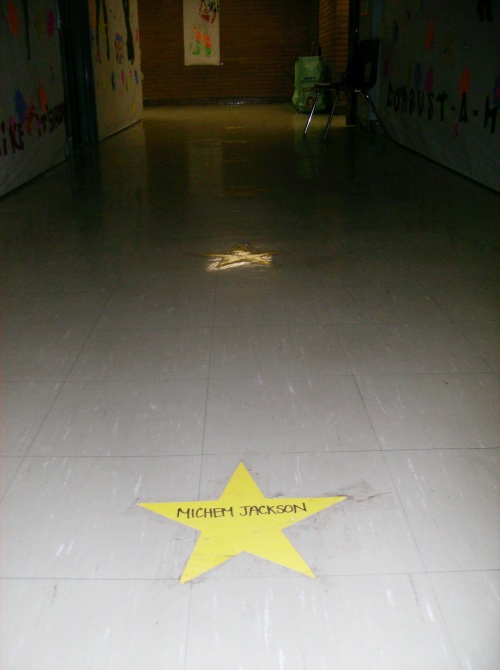 We even had LED Lights stuck to the ceiling :

When the judges came around, we cranked up our tunes and fog machine to make it a true dance party: 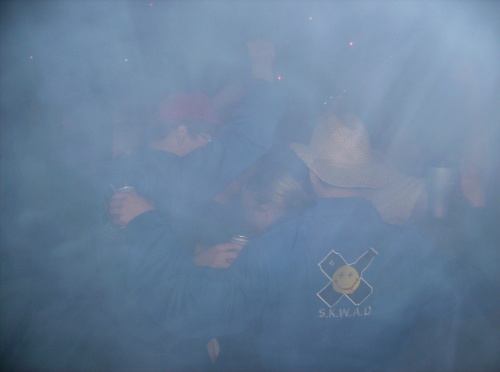 …and then we made the judges play drunk DDR. 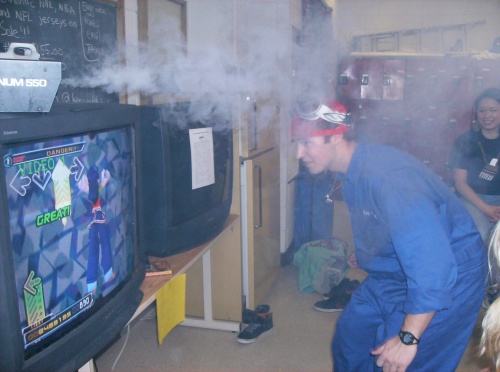 Have you ever decorated a hallway for something? If so, what was your theme!

P.S. If anyone from the UofC wants to see this hallways themselves, go through the hallways between Engineering A and C block foyers on the main floor.

Yesterday was the ENGG Week Parade, where a whole bunch of engineers walk around with costumes, banners and department t-shirts singing songs and chanting – so we’re being incredibly awesome or obnoxious, depending on your point of view. 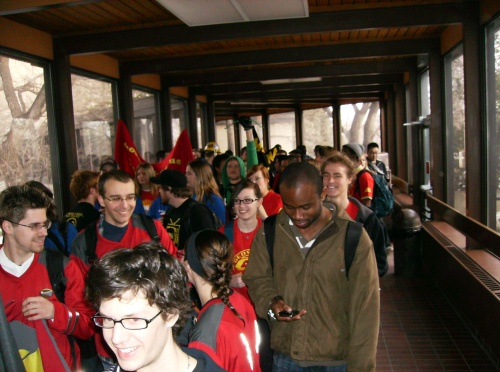 One of the main purposes of the parade is to head over to Scurfield Hall (the Business School part of the Uni) and create a ruckus while singing the “Engineering Song.” It’s a lot of fun! 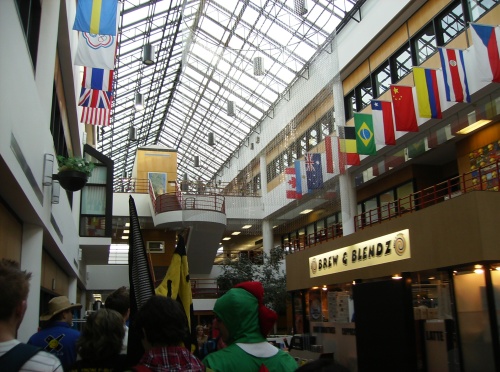 Mech (Mechanical Engineering: “Mechiana Jones”) even carried around their ark of the covenant (which was unsurprisingly filled with beer – sssh): 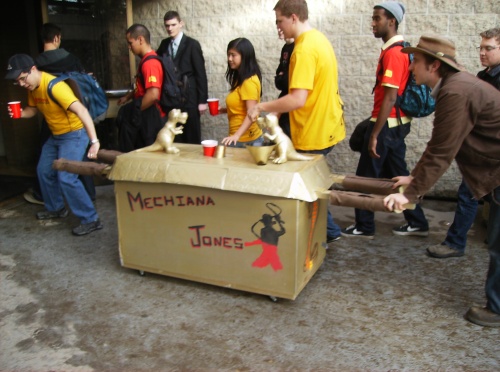 And here’s the crew representing Chem with our “Combustamove Banner.” 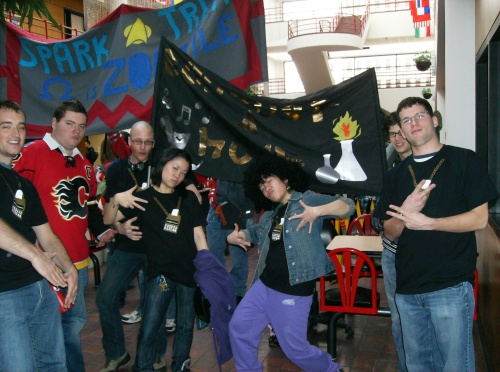 Yep, calculators are our bling. Move over Flavor Flav, your clock is so yesterday.

Off to bother a second year class to encourage them to join in on ENGG Week.

Does your school do anything fun for the first week of classes?

Over the last couple of days, I have been engrossed with preparations for ENGG Week when I haven’t been at my block week course. What’s ENGG Week, you ask? Here’s a good summary:

Engineering Week is a weeklong competition between the five engineering departments (Chemical, Civil, Electrical, Geomatics, and Mechanical) at the University of Calgary. Each department adopts a theme for the week, and they develop costumes, chants, odd habits, etc. that go along with this theme. The Engineering building is then decorated in posters, hallways are converted into live action sets, students are seen dressed in costumes singing creative chants and songs, and the grounds around the Engineering building see the creation of unique snow sculptures.

So it’s basically a week of shenanigans where not much gets done and lots of alcohol is consumed (at least by the ENGG Week judges at any rate.)

As most (some? none?) of you know, I’m in Chemical Engineering – happily known as Chem. Our theme is “Combustamove” – so basically get out there and bust-a-move. I’ve been helping with our hallway decoration (pictures to come!) and have been designated leader of the Iron Chef team. Yes, that is correct – I’m excited and a bit intimidated at the same time!

The Iron Chef challenge is similar to the one on TV, except that we know our secret ingredient ahead of time (maple syrup!), have 90 minutes to make a starter, a main course and a dessert, and how we have to bring EVERYTHING in ourselves. I’ve had to find a convection oven, BBQ, hot plate and/or coleman stove as well as attempt to round up all the other utensils, etc. required. I would love to share what I have on the menu, but I want to keep it a surprise (and prevent anyone from other departments from finding out.) I do have one question though: What side dish could be easily made on a BBQ/hot plate/camp stove that goes well with maple marinated pork?