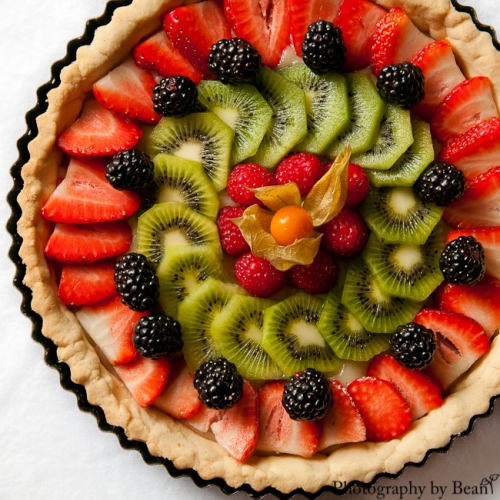 Happy New Years! I hope all of you had a blessed Christmas and a wonderful start to 2014!

Here’s the dessert that I made the most often this past year – a fruit tart, based on the Berry Tart from The Allergen-Free Baker’s Handbook. I’ve updated it to include less sugar and to make it coconut free. Mr. Bean liked it so much that he specifically requested me to make it again for a New Year’s Eve dinner with friends!

It has quite a few steps, but don’t be turned off as it’s pretty easy. The shortbread crust is probably the least finicky gluten free crust I’ve made (It’s made with a mixer and if it cracks or falls apart? That’s okay! Just put it back together and it won’t make a difference as it holds together just fine once it’s cooked!) You can make the custard out of whatever dairy free milk you desire – I chose almond as that’s the one I like and use the most. It can also be decorated with whatever fruit you have on hand – it’s pretty and delicious regardless!

The Tart I made for New Years – taken on my phone. 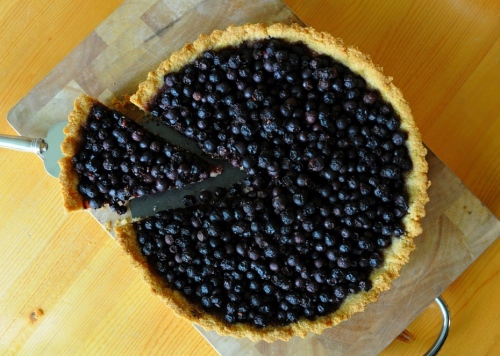 It’s days like today that I am glad we are a two computer family. (Two people are a family, right?) My laptop decided that it’s going to freeze all the time, so it’s at the shop for a little TLC. Cue Mr. Bean’s laptop – without it this post would have been written on my phone and then be known as the shortest SRC post ever with like one horrible phone photo (boo!). However, it still means that I don’t have my usual photo processing programs available – who knew one could get so attached to taking photos in RAW – so here are my attempts at using the jpg files my camera makes. Fun times!

For July’s Secret Recipe Club, I was paired up with JJ of 84th & 3rd. JJ lives in Australia and she also makes lots of vegan as well as gluten and dairy free recipes. (My kind of girl!) She also takes gorgeous photos, which makes it very difficult to choose what to make! Some recipes that caught my eye are her Raw Banana Cream Pie with a Raw Macadamia and Salted Caramel Crust, her Crackling Almond and Coconut Cookies, her Almond Pie Crust (Naturally Gluten Free!), and this delicious and easy looking Muesli!

I ended up choosing a variation of her Spiced Cherry Pie – but instead of cherries, I used Saskatoon Berries. I also used her Almond and Cornmeal Pie Crust as the shell as I love almond flour crusts and thought the idea of using cornmeal with it was interesting. I used blanched almond meal in the crust instead of the unblanched meal that JJ recommended as that’s what I had on hand. I’m used to quite a dense almond flour crust (ala Elana’s Almond Flour Cookbook), so having the crust be so light was unexpected – but that’s what eggs and coconut oil do. I might try it again but instead leave out the egg. It means one would have to probably bake it a bit more before filling, but that’s not a big deal.

Spiced Saskatoon Berry Tart
Based on this Spiced Cherry Pie

2 – 300g packages frozen Saskatoon berries (I didn’t thaw mine, but I think that the cooking time would be less if you did)
1 tbsp. Brandy (or other alcohol)
2 tbsp. lemon juice
3 tbsp. honey
1/4 c. cranberry juice 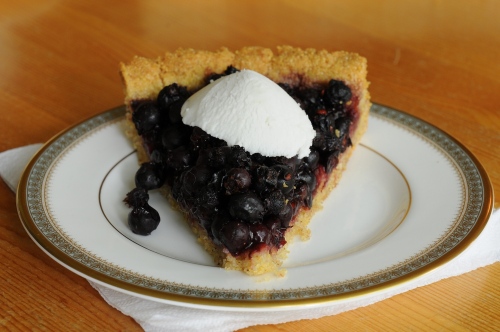 Check out the rest of Group D’s recipes below!

For this month’s Secret Recipe Club, I was paired with Jenni of The Gingered Whisk. I think it’s funny because she had my blog for May’s roundup and made these raw Cranberry Mango Nut Bars. She has tons of delicious recipes, such as Penne with Broccoli Rabe, Bacon and Chickpeas and Jaeger Schnitzel and Spaetzle. When I was deciding what to make, it was quite hot and I didn’t feel like using my stove/oven, so I looked at Jenni’s nifty recipe box for grilled recipes and came up with this grilled apple pie.

To any doubters, don’t let the idea of a grilled apple pie turn you off of this – basically what you do is bake the pie in a cast iron pan in your BBQ. I obviously made my pie gluten free – I tried to roll out the pie instead of piecing it together – and used a bit less sugar. Even with my changes and the novel baking method, I thought it turned out very well and it was yummy! Mr. Bean definitely agreed.

Please check out the rest of everyone else’s recipes for June’s SRC by clicking the link below!

Can’t decide whether you want pie or crisp? How about make both! For November’s Secret Recipe Club, I made One Lovely Life’s Fall Fruit Pie. Emily had TONS of beautiful and delicious looking recipes – it was so hard for me to choose just one to make! 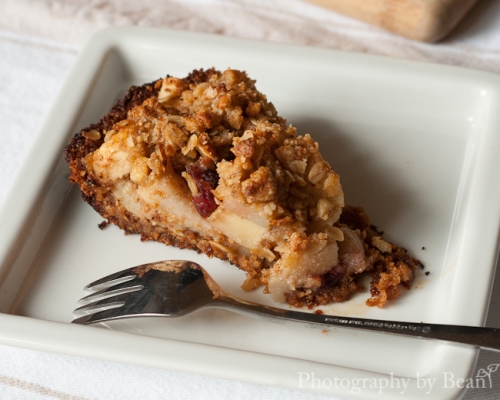 Obviously I changed things a bit as I can’t eat gluten. I made an almond flour crust (that I apparently cooked too much – user error on my part!) and used a mixture of almond and brown rice flour for the topping and brown rice flour in the pie itself. I also used less sugar as my apples and pears were quite sweet and no cinnamon so that my mom could eat it.

I quite enjoyed this pie – the topping makes it especially fabulous! I thinking I would love to make it again but with an actually nice pie crust that isn’t overcooked. I really like how this pie had both apples and pears – it’s like the best of both worlds!

As per Ground Cherry’s request, here is the recipe I used for the topping:

If you have some time, do go over and check out some of Emily’s recipes!

Ever heard of a galette before? I hadn’t – I guess that isn’t terribly surprising as french food has never been very prominent in my family – that is until a week or so ago my sister wrote about her apple galette making experience. Since I had some pie dough left over from my previous pie making and a ton of rhubarb from a friend to use up (unfortunately the rhubarb in the pot on my front step isn’t growing enough to make enough for baking), I wanted a way to use them up that wasn’t quite your traditional pie.  I was also feeling lazy and didn’t want to make more dough so that I could make the usual double crusted rhubarb pie – besides, I’ve already made one like that before! 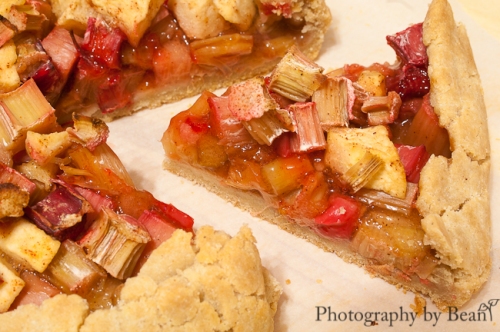 I was actually fairly surprised with how easy the galette is put together because there is no transferring the dough into the pie pan and having to piece it back together. I do recommend using a sturdier pie dough that can stand rolling and bending as both are key parts of making the galette.

I have mentioned a while ago how I had been cutting back the amount of sugar that I eat as I’ve come to realize that I’m not immune to the vicious cycle of the more sugar I eat, the more I crave it. The last few weeks I haven’t been very good and watching this and now I’m dealing with the consequences – I’ve been struggling more emotionally and gained a bit of weight because of all the less great food I have been eating. Thus, I have renewed my desire to reduce the amount of sugar I eat. Understandably, this poses a bit of a problem when using rhubarb as it is incredibly sour and requires some kind of sweetener. (I will occasionally eat cranberries straight, which causes Mr. Bean to laugh at all the faces I make, but I draw the line at eating unsweetened rhubarb.) I know I could use some sugar substitute, but I happily don’t own any, so I needed to come up with a different solution. The answer? I decided to add an apple to help add sweetness and just used a bare minimum of agave nectar to counteract the tang from the rhubarb. It worked quite well, but if you want it to be sweeter, don’t hesitate to add more agave nectar. 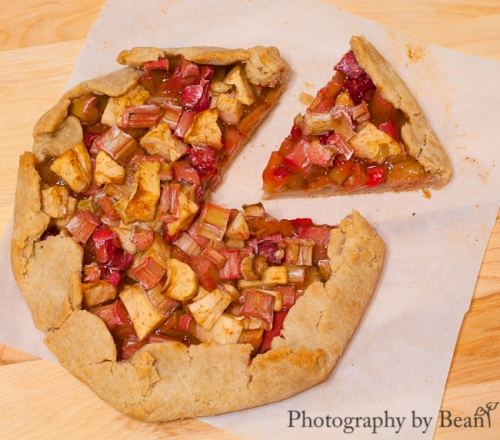