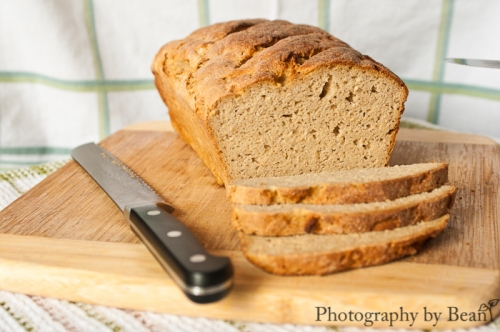 If this looks familiar – that’s because it is. It’s not the first time that I’ve made this gluten free vegan potato bread, but I have made quite a few changes and improvements (these pictures are my latest – it took 6 tries to get something I am completely happy with), so I wanted to share the new and improved recipe. The things I really like about this bread (besides it being incredibly tasty) are that despite being fairly dense, it is nice and moist (even 3 days later!) and can be sliced fairly thinly (~1/2 cm or 1/4″) without falling apart while eating it.

One major difference between the two versions is that I used weight measurements for the flours. I decided to do this after reading about Amy’s adventures in her bread making class. It allows you to have way more control and consistency in the amount of flour you use. In my opinion, it helps get the balance between being too dry and dense and not having enough structure to rise without collapsing. 🙂 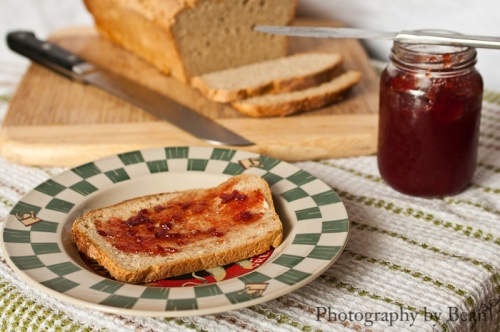 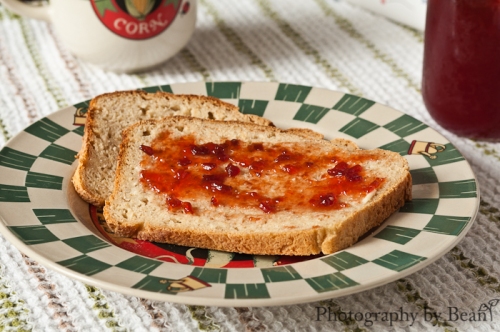 Have you tried making homemade bread before? 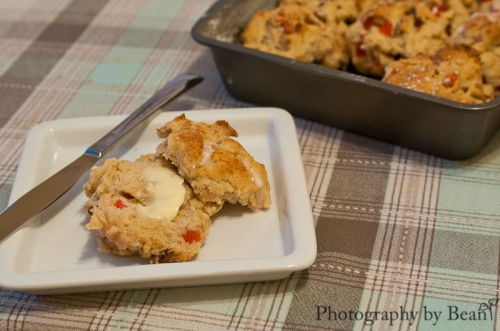 You know what’s quintessential to Holy Week for me? Hot cross buns. Unfortunately, after going gluten free, pretty much almost all of the hot cross buns (even the ones I have tried making!) I’ve had are synonymous to hockey pucks: suIper dry, dense and hard. In a word, disappointing. So, of course, I wanted to try making some again, this time being egg, dairy and (mostly) refined sugar free.

Unfortunately, my quick search of the interwebs didn’t bring up anything too promising, so I determined to try to make my own. The following recipe is based on this Hot Cross Bun recipe by the Baking Beauties. Of course, I made it egg free and changed things up a little.

When I took these babies out of the oven and pulled off the first bun, I let out a happy cry. Although a big dense, the texture was almost perfect! They were hard on the outside, soft on the inside, ripped apart nicely and delicious with just a hint of sweetness. The only down side is that they do dry out fairly quickly (all the more reason to eat them as soon as possible!), but stick them in the microwave wrapped in a paper towel for about 20 seconds and it’s back to soft delicious-ness. 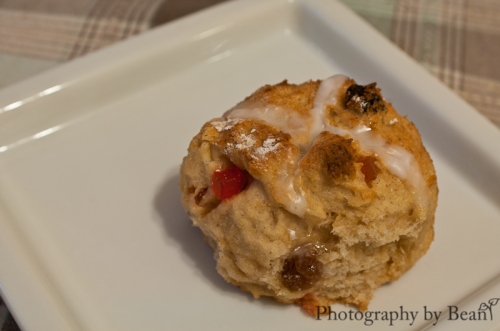 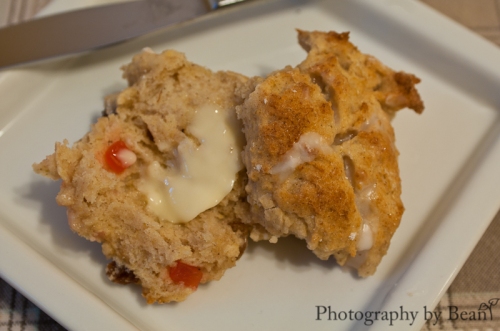 What is your favourite Easter/Passover treat?

This recipe has been shared on Slightly Indulgent Tuesdays, Hearth and Soul Blog Hop 44 and Gluten-Free Wednesdays. 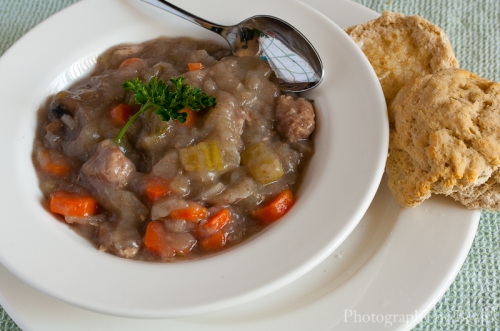 I know lamb is not everyone’s favourite meat, but when it’s done right, it’s one of my favourite. It’s definitely not something I eat on a regular basis given its cost, but I was determined to make lamb stew for St. Patrick’s Day. One of the local Irish type pubs around here makes a stew in a bread bowl – I’ve obviously never tried it, but the idea of it seems quite interesting to me. I unfortunately didn’t have enough time to try making a whole loaf of bread, let alone two – one for both Mr. Bean and I. So, I thought I would try to make buns using the easiest bread recipe in the Allergen-Free Baker’s Handbook by Cybele Pascal – gluten free beer bread.

I wasn’t sure what to expect from beer bread as I think I’ve had gluten free beer twice before this. It was really tasty with a bit of margarine and dipped in stew! Yum. I was actually really impressed with their texture and how much they rose in the oven. I almost wished I added more water to the stew so that we’d have more stew to mop up at the end. 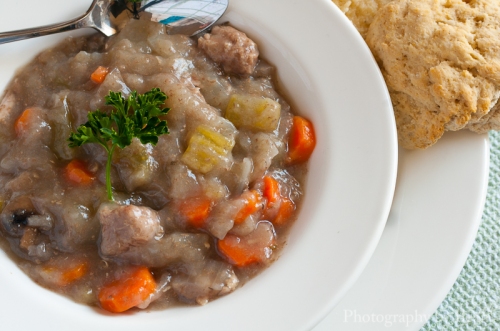 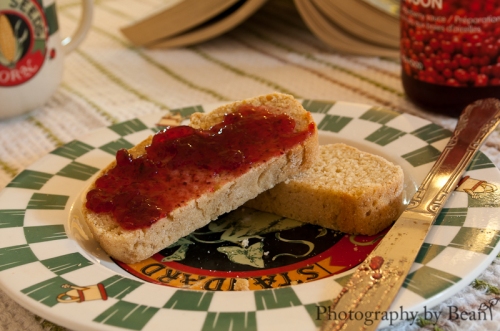 One of my favourite activities as a kid was making bread with either my mom or grannie. My siblings and I would take turns mixing ingredients and kneading the dough. In the summer, we’d make it out on the deck at the cottage and let it rise in the sun under a dish cloth.. The hardest part for me was waiting for the dough to rise and to not get caught snitching from the bottom of the rising bread dough!

I’m kind of sad that bread making is no longer such a family affair, but it doesn’t mean that it has to be any less enjoyable. Unfortunately, as many of you know, gluten free bread does its best to leach out any enjoyment in bread making as it has a tendency to like to turn into a brick, collapses in the middle or some other epic failure. (Not that I’m speaking from experience or anything. Of course not!) Out of all the GF bread I’ve tried to make over my life, the only success we’ve had was when Mr. Bean made me a loaf of bread using a recipe one of his coworkers gave me. In fact, it was so successful that it rose over the sides of the pan and was gushing out bread batter while it was cooking in the oven and then fell part way through baking. Despite its baking angst, the texture was fantastic and it was very tasty!

However, when I found out that this month’s gluten free challenge over at The Gluten-Free Homemaker was to bake a loaf of yeast bread, adventurous me wanted to try something that was different. I’m also not eating eggs, so that recipe was a no go anyways.

I found a recipe for potato bread in the Allergen-Free Bakers Handbook, but I haven’t been able to find any soy and dairy free shortening or rice milk powder in these parts and I wanted to make it refined sugar free, I had to improvise. I changed some of the ingredients to use materials I had on hand, including using a less starch heavy flour mixture. I also divided it up into two loaves as I didn’t want it to overflow like the previous time (but that turned out to be unnecessary – go figure). The bread was a bit dense, so I want to go back and readjust amounts of liquids and flours. It still tasted pretty good. Or at least it did to Mr. Bean and I. 🙂 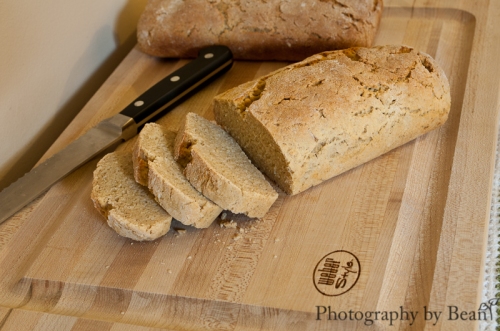 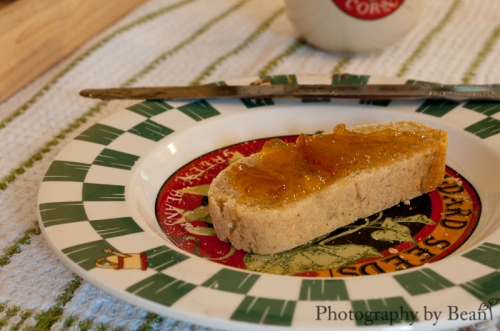 I’m looking forward to trying this bread again as making bread myself is much easier on the wallet than paying $6+ for a loaf at the store! Wish me luck!

Have you ever tried making bread? How did it turn out?

A while ago I won a bag of Carol’s (from Simply Gluten Free) gourmet all purpose gluten free flour. Since I usually use a mixture of rice flour, tapioca starch and potato starch in varying ratios depending on the use, I was interested to see how this flour mix would compare.

I was quite excited to put it to the test, so I began to think of what baked items translate into gluten free poorly. First was pastry and the other was yeast breads. Since I didn’t really feel like making pie, I decided to make cinnamon buns. Mr. Bean made me cinnamon buns over a year ago with this recipe and they were quite good but I wanted to make them better. In addition, I’m currently trying to figure out whether I should be eating eggs and/or dairy, so I wanted to make the buns vegan.

Fortunately for the flour, it passed with flying colours – the buns were tasty, gooey, fluffy and not crumbly. Everything a cinnamon bun should be!

The verdict? Delicious. My dad said that these were the best gluten free cinnamon anything that he has ever had and wanted me to come and teach him how to make them.

Now to try find a non-pie pastry recipe to try…

What is your favourite pastry item?