As I mentioned in my September SRC post, Mr Bean and I went to Montreal mid-September for a work conference for him. It was a bit of a hit and run trip – we arrived on Tuesday evening, the conference ran from Wednesday morning to Saturday afternoon and we left on Sunday morning. Definitely worth it though!

My sister lives in Quebec, so I took the time to visit with her while Mr. Bean was otherwise occupied. Both of us love food, so we knew the time we were going to spend together would revolve around it. Not terribly surprising, but very delicious!

On the Wednesday morning, my sister picked me up from the hotel and we went and picked apples. 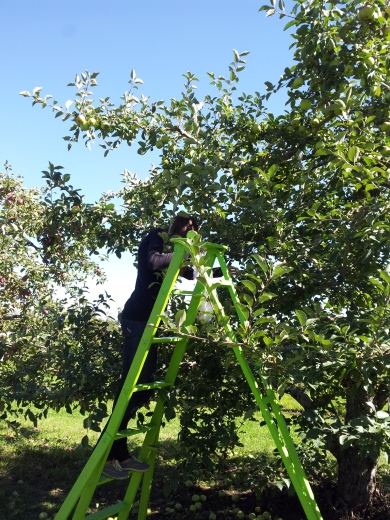 It was quite fun! The ladders were a bit bizarre and part way through the orchard was invaded by 4 or 5 bus loads of school children. We ended up with two large bags of apples, which we then put to good use throughout the rest of the trip!

We planned to spend lots of time making food together and we definitely did! Here’s what we made (over 2 1/2 days): 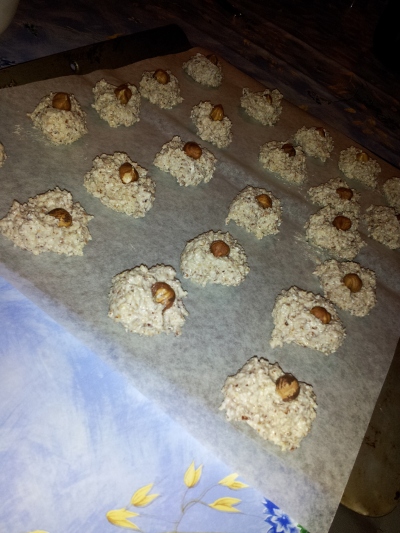 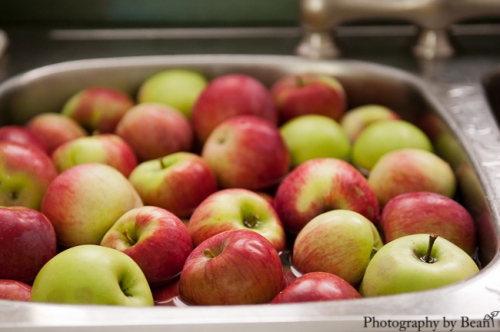 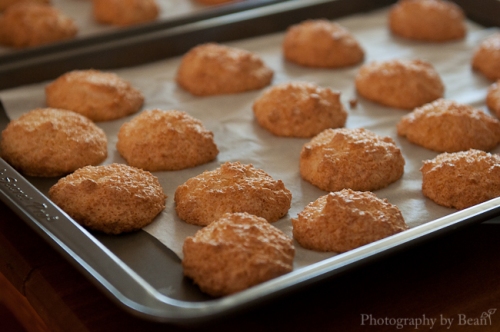 My sister then dropped me off in Montreal on the Friday afternoon for a conference event and then re-joined us on Saturday morning for some sight-seeing and food adventures.

For lunch, we had Poutine at La Banquise. Poutine is a french Canadian dish that consists of fries, cheese curds and gravy, but this place also had many different variations with various additions. 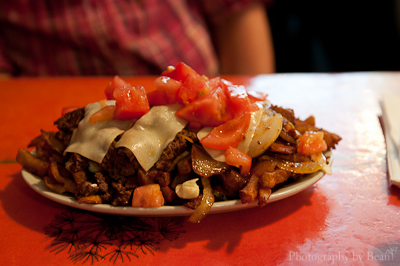 I had the “La Matty” – bacon, onions, peppers and mushrooms without the gravy as it’s definitely not gluten free. I also ordered a salad so that I wouldn’t feel as gross and heavy. Definitely a wise move! 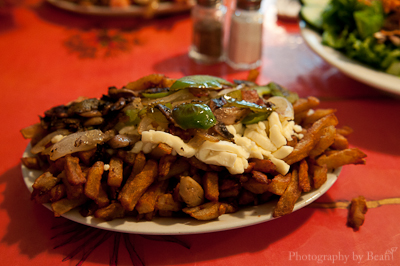 To be honest, I didn’t really like it that much as I thought it was kind of greasy and it probably wasn’t as good as if it were slathered in gravy. Oh well. We decided that we would try to make it ourselves with gluten free gravy and not as greasy fries when my sister is coming to visit for my cousin’s wedding in October.

They pretty much have the most awesome tables ever. I’m sad that we weren’t sitting closer to a window so that the light would have been better.

We also went to a restaurant called Zero8. Everything on their menu is made without the top 8 allergens – gluten, dairy, soy, eggs, peanuts, tree nuts, sesame and shellfish. It’s a great place for people with allergies (obviously) and has some pretty tasty food!

We started off the with the Bruschetta, then Mr. Bean had the Duck Confit and both my sister and I had lamb burgers.

The only thing I was disappointed in was the dessert as I had a spice cake that was like cardboard. Apparently, they baked it too much. The Chocolate ganache was the only thing that made it worthwhile… 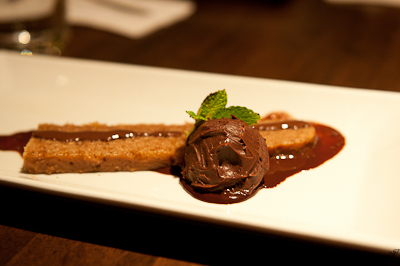 My sister and I also found a gluten free bakery called “Cookie Stefanie“, which was pretty delicious. Their Orange Cranberry muffin made a good breakfast for our early travel day home.

I would really like to go back to Quebec to explore the food side of things more (there are at least a few other GF bakeries that we didn’t visit), plus visit Quebec City!

Have you had any Culinary Adventures lately?

For April’s Secret Recipe Club, I was paired with Nora of Natural Noshing. She tried to cook and bake gluten and refined sugar free, which made it really difficult to choose just one thing! 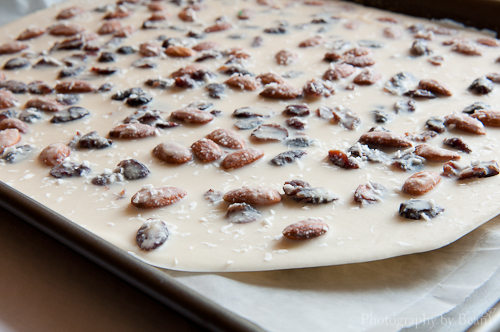 I decided to make her Coconut Trail Mix Bark made with homemade coconut butter. It’s like white chocolate bark but without the sugar. I really love that she also only uses a normal food processor instead of the fancy blenders many people seem to have for making nut butters and such. I was so impressed with this bark as there is essentially no added sugar but it’s still plenty sweet enough.

I brought some to my family and they were so impressed that dried coconut would become so smooth and chocolate like. My brother absolutely loved it, which is fantastic as this makes a fair amount of bark! 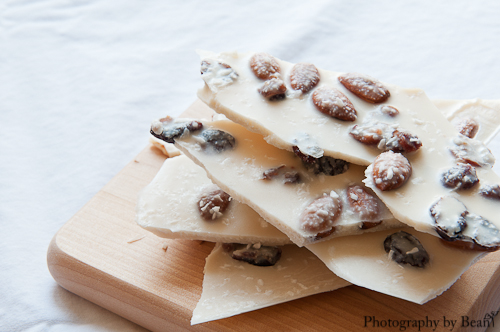 You know how sometimes you get a bit ahead of yourself and decide that you’re going to make things without a set recipe? This is one of those recipes. I needed to make something for a birthday party Mr. Bean and I went to yesterday, but I was unsure of what to make. This month’s Go Ahead Honey It’s Gluten Free hosted by A Gluten Free Day has the theme of “Garden Tea Party,” so I used that as my starting point. I asked Mr. Bean what I haven’t made in a while and he said flan or tarts with flan in them. Since I’ve been on a bit of a raw kick, I couldn’t decide whether or not I wanted to make them raw or not, so I did both. Over achiever much?

Since I didn’t use a pre-set recipe, I want to share who I received my inspiration from (Other than my new Raw cookbook.)

Oh man, were these an adventure. First, I learned why when recipes call for a vitamix, using a magic bullet doesn’t cut it (especially since overheats after about 10 seconds.) Secondly, I learned that you shouldn’t stick cans of coconut milk in the freezer as both the cream and clear liquid freeze, which means that the frozen chunks that you think are cream aren’t, so it didn’t whip up the way it was supposed to. Duh. Now that we established that, these wouldn’t have nearly been as time consuming had I not done those two things, so please do not be discouraged! Everything is fairly straight forward if you have the correct equipment and techniques. I’m not saying that this is impossible with a magic bullet, but it will save you so much time, frustration and agony! 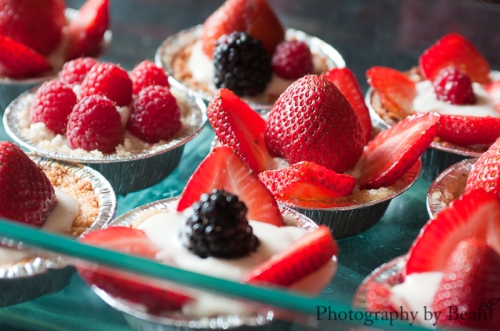 Thankfully, these turned out very well, so it made it worth the effort. I made two different crusts and two different fillings. It’s hard to say which combination was my favourite, but it’s probably the raw crust with the raw coconut filling. Feel free to use whatever kind of berries you want!

Note: I did use one fresh coconut for this recipe. I cracked it open using the first set of instructions here, cut out the meat by cutting triangles and prying it out and used a vegetable peeler to remove the remaining husk. 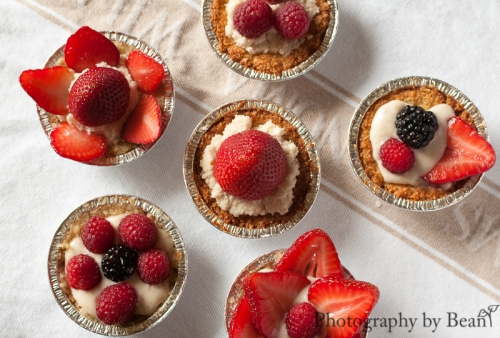 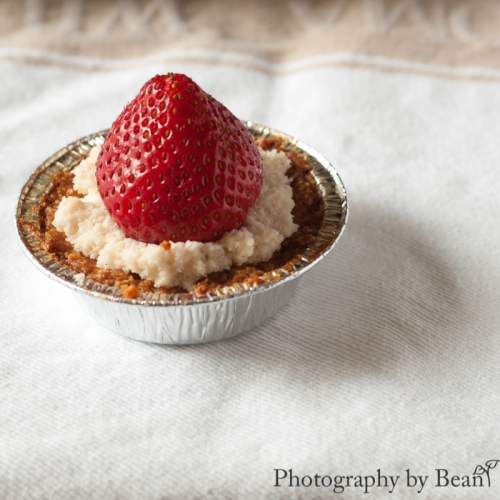 What is your favourite kind of tart?

Submitted to: Slightly Indulgent Tuesdays, Hearth and Soul Hop 49 and Gluten Free Wednesdays. You can also see one of my photos on foodgawker!

I chose to “adopt” Deanna of The Mommy Bowl in this month’s “Adopt a Gluten Free Blogger” hosted by Lexie of Lexie’s Kitchen. Since I have found Deanna’s blog, I have been inspired to try experimenting in my baking and that following a recipe isn’t always needed. For example, when she makes cookies with her son, they start with a a base measurement of  fat (usually coconut oil) and add appropriate sweeteners and flours based on the consistency and flavours they want – isn’t that cool?  As an added bonus, pretty much all her recipes are gluten free and vegan – perfect for this hesitant to introduce eggs and dairy back into my diet girl. Plus, she uses lots of peanuts, which always goes over very well in the Bean household!

First I made her Kiddo’s killer banana pancakes. Apparently I made them on National Pancake Day – I can pretend that I made them for that purpose, but I really just felt like eating breakfast for dinner. They were really good with fruit and a bit of maple syrup. They were very soft and fluffy but they fell apart easily – most likely due to user error as I had never made a flax egg before and I don’t think that I let it sit for long enough.

Since I’m an overachiever, I wasn’t satisfied with making only one of Deanna’s recipes. Mr. Bean gave me some moose cookie cutters for Christmas and I REALLY wanted to try them out, so I made her Choco Nut Cut Outs. I was also quite excited to try these cookies as I had never used coconut or peanut flour* before! I only made half a recipe as we really don’t need huge amounts of cookies sitting around.

These cookies were very easy to make and turned out really well! Mr. Bean loved them. I had to ask him not to eat them all so I would have some left to take pictures of the next day!

Have you found a blog recently that has inspired you to try something new?

*I ended up making my own peanut flour by grinding up a bunch of peanuts in our Magic Bullet. I used the remaining peanuts to make peanut butter – yum!

My First Attempt at Ice Cream and Vanilla Beans

I would like to announce that today was my first time using a vanilla bean. Honestly, I didn’t know that our grocery store had them ( and I’ve spent a ridiculous amount time in the baking aisle – trust me) until I asked Mr. Bean to look for them. (Aren’t I such a nice wife?) Cutting open and scraping out the vanilla-y goodness is quite a novelty for me.

So what did I do with it? Made ice “cream”, of course! I know, I know, it’s a bit late to be adding to the summer ice cream recipe bonanza (hey, there’s still one week left!), but we only obtained a method for the desired madness a few days ago – a Magic Bullet. No longer do I have to stare at recipes wishing that I could do something similar, so I celebrated and made a version of banana coconut ice “cream” ala Coconut Girl. 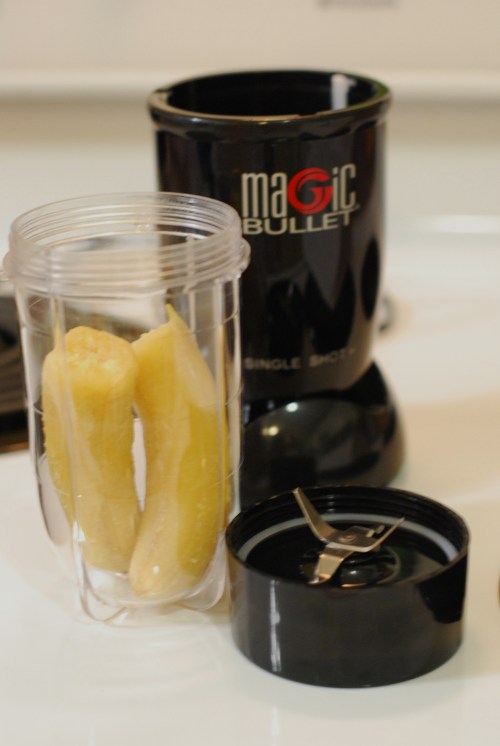 I only used one banana and too much coconut milk, so it turned out a bit liquidy, but the taste tester didn’t complain.

I feel like I’ve found a brave new world of food – fortunately we have a few last days of summer to enjoy it in!

But who are we kidding, I’ll probably make ice cream or sorbet when it’s -40C with windchill.

What is your favourite homemade ice cream recipe?