A Tale of Two Boots

Once upon a time (ten years ago to be exact), in a land far, far away (Switzerland) a pair of boots found a home on the feet of a girl from across the water. Over the years the boots had periods of both hibernation and use. As time past, the girl’s love and use of the boots increased.

Time after time, the boots proved their worth despite their aging and worn exterior. Then, on one fateful trip, the boots finally fell apart on the second day of a four day trip. With no way to fix them, the girl lovingly repaired them the best she could with what she had – moleskin and bandaids. 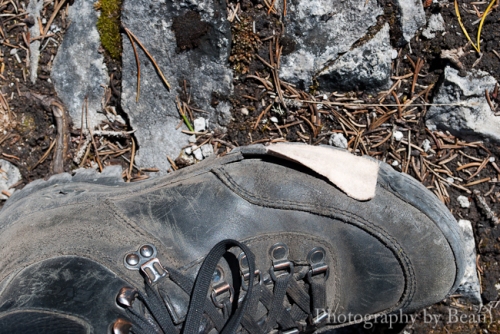 Despite all surgeries and attempts at resuscitating the boots, by the end of the trip there was no hope left for this pair of boots. After ten years, the faithful pair of hiking boots were laid to rest.

Now the girl is faced with the task of finding a pair of replacement boots to fit her wide high arched feet. Hopefully the next pair of boots fare as well as this last pair!

What’s your favourite pair of shoes?