I got this idea (partially thanks to Allison) that I should go for a snow run this afternoon. I know I sound a bit crazy especially since I rarely run. However, in the last three days, I have run (at least partially through snow) to catch a bus three times. I reckoned since I’m going to be taking the bus a lot from now on (until spring comes around at any rate), I’m going to be running to catch the bus very frequently as that’s how I roll. So, I thought, maybe I should practise running, so that on Monday when I have to run for the bus, I’ll be more prepared. (Or at least I can pretend to be.)

So, I bundled myself up appropriately – as if I were going for a walk with +5-10C warmer weather, put on my hiking runners and headed out the door. So, there I was, running along happily: across the street and then started up the hill. Then the wind started blowing – holy man is it hard to breathe when the air is so bloody cold! You try to take deeper breaths, but it just hurts more. But in the name of exercise, I kept on running, puffing and panting away.

As I alluded to previously, it was blizzard-y yesterday and anywhere from a couple to 30 cm of snow was deposited on the ground, depending on where the wind blew it. Case Example: 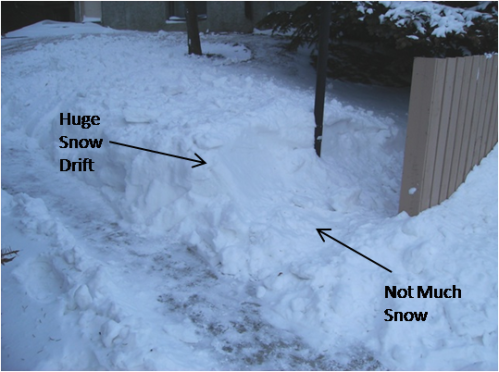 So, here I was expecting to have to run through huge snow drifts and/or icy sidewalks, but I only encountered both a few times. Thank you people of Calgary for being so quick to shovel your sidewalks!

I eventually finished my loop, ran back down the hill and headed home to a cup of peppermint tea. (The best kind!) I ran for 15-20 minutes – all I can hope for is that my next bus run isn’t that long!

Would I do it again? Probably. As it was actually quite entertaining, I wasn’t too hot or cold and running on snow isn’t as jarring as running on bare pavement. Have you ever tried winter running? What are your experiences?