Adventure to the GF Patisserie

I sometimes have a lot of difficulty holding myself back when it comes to excellent gluten free baking. Or granola bars. Or chocolate. Sometimes, it’s amazing that I’m not 200+lbs because of all the food I want to eat.

For example, on Saturday, Mr. Bean and I headed out to Cochrane to check out a new found (by me) gluten free bakery called GF Patisserie. They were celebrating their 1 year anniversary, so we started off with a mini piece of very delicious birthday cake.

Had I the choice, I would probably have bought many, many things but I had restraint (my waist thanks me.) There were cakes, brownies, cupcakes, coffee cakes, breads and a whole bunch of other frozen delights – we ended up getting  a mini coffee cake and a loaf of flax bread.

I think I ate about 3/4 of the loaf of flax bread yesterday. It’s especially good with marmalade:

Or anything, really. Thankfully, the loaf isn’t that big: 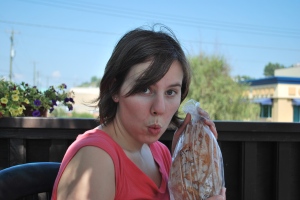 Hey, if you had bread for the first time in a really long time that had texture similar to what you remember gluten-tastic bread to be like, you’d have difficulty holding back as well.

So, if anyone who reads this is in the Calgary area, the trip out to Cochrane is worth it.

With that all said, I better go back to explaining to Mr. Bean why I got so excited about Darth Vader’s big pretty ship in the Empire Strikes Back.

What types of food do you have difficulty restraining yourself from pigging out on?