The third class was a lot less anxious than the first – we all had a better idea of what to expect and were more confident in our own abilities.

We first practised making shell borders and the second step of the exquisite Wilton rose. (That’s what they call it in my book. much to my amusement!) We then practised figure piping – namely clowns. I’m not a huge fan of clowns, but I broke in and bought those creepy clown  head things. (To make up for it, I put them in really silly positions. So there.) For the clowns, we used a technique called “striping” where you paint on however many stripes of colour in the piping bag so the icing comes out with stripes of colour.

The only problem with clowns is that my carrier has very low clearance, so they got squished. 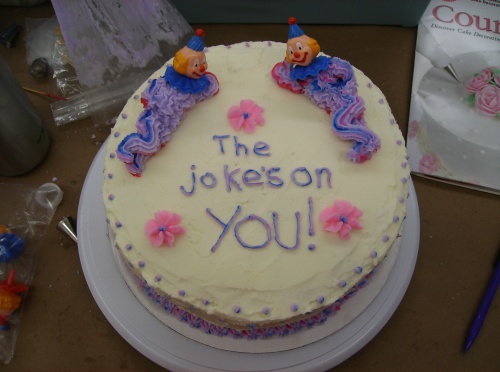 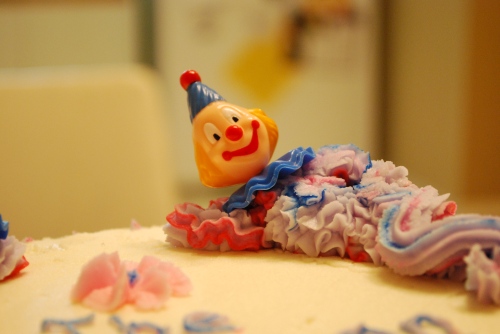 I tried to fix it, but his arm was kaput. Sorry, clown. 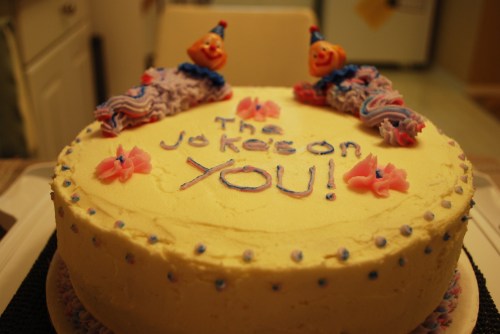 You’re probably wondering why I wrote “the joke’s on you.” Well, I asked my classmates what I should write and one said: “The joke’s on you,” so I did. I guess it is somewhat fitting for clowns. 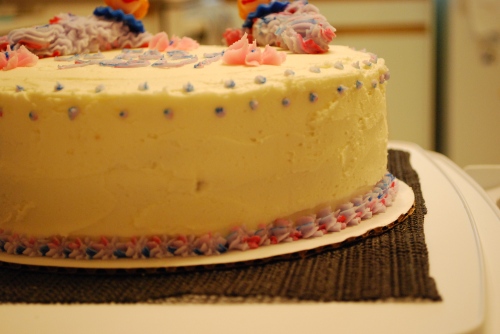 I used a simple star border along the bottom and alternating dots on the top because I didn’t feel confident enough in my shell border making skills.

I used my yellow cake recipe and even after a week+ in the freezer, it was so moist and good. (For gluten free this is seriously a miracle.)  I also used cherry pie filling again because it’s just that tasty.

Some exciting news: one of my coworkers asked me to make a cake for his daughter’s birthday! I am really excited!