A bit of help, please!

I want to repaint our bedroom to a lighter yellow colour (right now, it’s a weird yellow-green-gray colour that is quite depressing) and spruce up our living room. So… I was wondering if anyone has any interior design blogs they’d like to share?

This recipe is one I took from my Mum’s cookbook that she hand copied from my Grannie’s cookbook. I don’t imagine that it’s that different from any other banana muffin recipe, except this one has been tweaked slightly to accomodate allergies.

1. Cream fat and Sugar (I just used a wooden spoon – you could use an electric mixer, but I was feeling lazy)

3. Add the sifted dry ingredients and lemon juice. (I don’t have a proper shifter thing, so I used a metal sieve and tapped it until all the flour went through. I usually don’t do this because I’m lazy – but for you guys I did – but it did make the muffins a bit lighter and fluffier.) 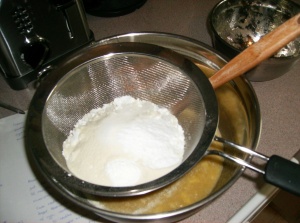 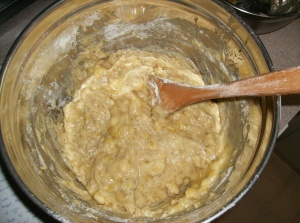 Note: the batter should be slightly lumpy looking, or else it creates little tunnels in your muffins, which is undesirable!

See, muffins are just that simple!

This morning, I was reading Mrs. Kiwi’s Blog and she was talking about how she has Vasovagal Syncope. I’m pretty sure that I have this, too. (I wanted to phone my  First off, what is Vasovagal Syncope? (For the record, I’m not entirely sure how to pronounce it) Well, it’s the most common cause of fainting and at least for me, is a reflex to some trigger as shown here:

The reflex responsible for vasovagal syncope works like this: A person is exposed to some stimulus (such as a needle stick) that initiates the reflex. The “stimulated” nerves (the nerves of the stuck finger, for instance) send an electrical signal to the vasomotor center in the brainstem. (The vasomotor center determines the body’s vascular “tone.”) The vasomotor center, in turn, signals the blood vessels in the legs to dilate, causing the blood to pool in the legs, and producing syncope. This same reflex also causes a drop in the heart rate, but usually it is the pooling of blood in the legs – and not the slow heart rate – that produces loss of consciousness.

I think wikipedia describes how I feel when such an episode happens:

In people with vasovagal episodes, the episodes are typically recurrent, usually happening when the person is exposed to a specific trigger. The initial episode often occurs when the person is a teenager, then recurs in clusters throughout his or her life. Prior to losing consciousness, the individual frequently experiences a prodrome of symptoms such as lightheadedness, nausea, sweating, ringing in the ears, uncomfortable feeling in the heart, weakness and visual disturbances. These last for at least a few seconds before consciousness is lost (if it is lost), which typically happens when the person is sitting up or standing. When sufferers pass out, they fall down (unless this is impeded); and when in this position, effective blood flow to the brain is immediately restored, allowing the person to wake up.

The autonomic nervous system‘s physiologic state (see below) leading to loss of consciousness may persist for several minutes, so:

–Wikipedia*
*note: I realize that this article is sourced improperly, but it has the best description.

I have a few major episodes that stick out in my memory:

Finding out what the name of this affliction has made me quite pleased with myself. No longer will I have to say: “sometimes when I get really squeamish or uncomfortable, I faint.” So thanks, Mrs. Kiwi. It just took me 10+ years to figure out what it was!

Do you have any weird medical afflictions? How did you find out about them?

So, I’m sick. It’s been a long time in the coming and my sinus infection is finally here. Not cool. I even took this afternoon off of work to sleep, which I did for 3 hours.

Mr. Bean is being nice and making me some chicken soup. I’m also going to up my intake of vitamin D and C*, stay really hot as well as try to sleep more. Oh yes, and take my antibiotics. What do you do when you’re sick?

Since I’m prone to sinus infections, it helps if I don’t blow my nose. I know you’re thinking: “What? why don’t you blow your nose? Isn’t that important to get nasty bits out?” Well, for me when I blow my nose it forces some of the stuff back into my sinuses making it worse. So maybe my coworkers had a secret reason for wanting me to go home – they were sick of my sniffling. Do you do anything non-conventional when you’re sickly?

On a side note, Mr. Bean works at a Cancer centre and had to do this “employee orientation” thing this morning. When he got home from work, he shared this wonderful video with me:

Why don’t we do it in our sleeves?

I especially like it when the plasticine “germs” die.

*I think they’ve done studies that disprove vitamin C from really helping colds, but if you have it early on (at least for myself) it’s helpful in making things less severve. Plus, the chewable stuff and fruits are really tasty.

I haven’t been around very much recently, as I had somewhat of a melt down on the weekend and another one on Monday. I have taken the last two days off (as per doctor’s orders) and hopefully I’ll be back at work tomorrow. I haven’t been on the computer as much as usual because the doctor told me to: a) get out of the house, b) to do things that I like and c) not do nothing (I usually consider spending lots of time on the computer “doing nothing”. So, I have been doing a lot of baking, walking and spending time with Mr. Bean (he was not working yesterday, either) and my family.

Today my plan is to:

Does anyone know how to quickly kill a cellphone battery? I really want to recharge my phone, but it’s refusing to die.

The bright side of doing all this baking is that I will soon be able to post some photos and recipes!

Tagged as feelings, To do